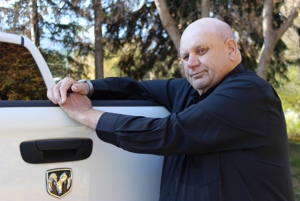 Bob was born in 1940 in the Kamloops area and spent his youth in the Creston area learning farming, logging and mining skills.  He moved to Golden in 1960 with his most prized possession – his ’56 ford pickup and began his hard-working career in the logging industry.  He started at the bottom of manual jobs which finally led to his love of running all the various heavy equipment.  He spent many years driving and owning logging trucks, road building and developing his special skills with a backhoe.  His last culvert project was done while mostly blind and done with incredible precision.  He retired from “the bush” after that project was completed.  He carried clear memories of all the points of the forest service areas and probably had a hand in most of the access to local recreation sites.

He met the love of his life Biv, and they started their life together in 1962. She was always his rock and stood beside him for the rest of his life. They initially lived in Donald but worked together to raise their children Shane and Crystal in Golden.  He welcomed the addition to his little family of both Bobbi and Mark as children in-laws and the grandchildren in-laws of Cam and Danielle.  He adored his family and was always present and active, but he especially enjoyed his time spent with his grandchildren Kyle and Erin growing up.  He was also blessed with his four great grandchildren – Baya, Jade, Nathan and Daxon all whom he adored and was very proud of.

He worked many Teamster construction site jobs but his favorite to discuss was the building of the Mica Dam at Revelstoke in the ‘70’s.  He also operated a small shop in town where he sold and repaired chain saws, motorcycles and snowmachines which led to his involvement with the local snowmobile racing group and the construction of the local race track and Snow Kings Castle.  He eventually became a director for the BCSVA which was the governing body for a racing circuit which his son, Shane, competed and won in for many years.  He had also restored a ‘52 Willy Jeep that he competed in 4-wheel drive rallies where he particularly enjoyed pole bending and drag racing.  He loved anything that was “Loud and Fast!”

He loved all animals and there was always a collection of dogs and horses over the years that he adored.  He supported Crystal wholeheartedly in all her equine adventures – even to the point of quitting a job to take her sick horse to the Vet College in Saskatoon to see if he could be saved, and Sir Ranabou was.

Bob was incredibly kind to all but had developed his own moral “code” of fierce protection of anything that was disrespectful and was quick to respond which occasionally brought out his “redneck” side.  It was never out of self gain but to defend what he perceived to be any danger.  He was quick to react, lightening fast and strong like a bull.  He always said, “Don’t ever start a fight but make sure you are ready to finish it”.  He was a guardian to all the kids in the neighborhood and was generous with his time, toys and resources.  Everyone was welcome to join in and he held space for all.  He was happy to share any knowledge he had.  He genuinely liked people and loved to hear their stories.

He endured the destruction of Diabetes with first losing his eyesight, undergoing open heart surgery, a heart valve replacement and eventually requiring both his right and left legs to be amputated below the knee but with sheer determination learned to walk on two new prosthetic legs.  Through the course of this terrible disease, Bob met many incredible people in the health care field, and we’d like to thank the many individuals that made the 30 plus years of battling this disease a little easier.  If ever he had a theme song it would be the latest title by Trace Adkins called “The way I want to go” so google it, have a listen and think about the man who was “Bob”…….